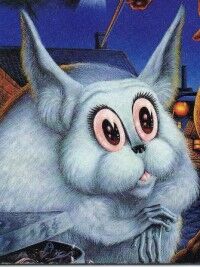 Beep is a character from the world of Doctor Who. He was the ruler of the Meeps, an advanced, peace-loving and extremely cute and furry alien race who were unfortunately turned into a race of cute and furry xenophobic genocidal maniacs by the radiation from a black star which passed close by their planet. The Meeps waged war on the galaxy, subjugating entire civilisations until they were all but wiped out by the Wrarth Warriors, a galactic police unit built from five alien races by the Star Council.

Only Beep escaped and, pursued by the Wrarth Warriors, crash-landed in the English town of Blackcastle, where he duped first schoolgirl Sharon Davies and her friend Fudge Higgins, and then the Time Lord known as the Doctor, into helping him by pretending to be an innocent creature pursued by monsters. Eventually forced to show his hand/paw/appendage, Beep almost turned Blackcastle into a black hole in order to get his ship's star-drive operational. He was defeated by the Doctor and Sharon and taken by the Wrarth Warriors to face trial for his hideous crimes.

Beep was sentenced to a lengthy term of imprisonment, but was inexplicably paroled after just 15 years and has since returned to plague the Doctor on several more occasions.

Beep's second attack on Earth was thwarted when he was imprisoned inside an old Lassie movie, which the Doctor said he might sell to a major studio.

The Meep is one of the few Doctor Who comics characters who has made it into other media, appearing in the Big Finish audio story The Ratings War, which was given away free as a promotional CD with Doctor Who Magazine #313. An audio adaptation of The Star Beast is due in 2019.

Retrieved from "https://britishcomics.fandom.com/wiki/Beep_the_Meep?oldid=122440"
Community content is available under CC-BY-SA unless otherwise noted.