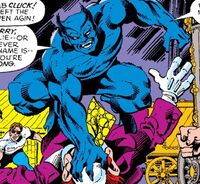 Henry 'Hank' McCoy is a mutant, and was one of the first generation of X-Men. Originally basically human looking but with abnormally large hands and feet, biochemist Hank, despite supposedly being a genius, later drank his own experimental mutagenic serum in order to stop it from falling into the wrong hands and ended up looking like a blue gorilla! It was only the first of many mistakes. Hank has also at times been a member of both the Avengers and the Defenders, as well as the first incarnation of X-Factor.

Beast's UK originated appearances were mostly confined to the titles published by Panini before Marvel stopped them from creating original Marvel material.

Retrieved from "https://britishcomics.fandom.com/wiki/Beast?oldid=158661"
Community content is available under CC-BY-SA unless otherwise noted.