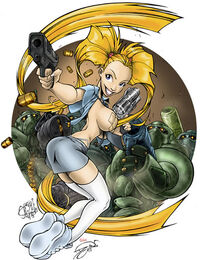 Julie Glocke is a teenage schoolgirl whose life changed when a spy slipped a stolen weapon using nano-technology into her backpack to escape detection. The nano-tech injected itself into Julie's body, fusing with her cells, and causing her when placed under stress to metamorphose into an improbably well endowed superhuman capable of generating a variety of weapons from within her own body. As it turned out, this was quite useful as quite a lot of people wanted the technology back and didn't really care how they got it!

Able to generate weapons from within herself.

Tends to be the victim of boob jokes. Also tends to change form without meaning to when under stress.

The Bazooka Jules series lasted just three issues, plus the Bazooka Jules Bumper Edition, a collected reprint of the first two (published between issues #2 and #3). Creator Neil Googe still intends to return to the character, however.

One in-joke in the series had Jules telling a character who was quite clearly Tank Girl that "you've had your chance, now it's my turn".

Retrieved from "https://britishcomics.fandom.com/wiki/Bazooka_Jules?oldid=122961"
Community content is available under CC-BY-SA unless otherwise noted.