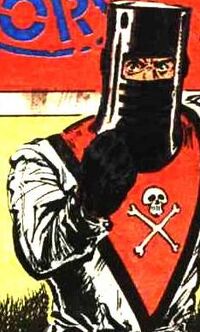 Little is known of the background of Baron Ironblood, but he is thought to be of Swiss descent and an actual Baron. He was a brilliant military strategist with a hunger for power, who commanded a deeply loyal force of international terrorists called the Red Shadows, led by his right-hand man the Black Major. Ironblood and his forces repeatedly clashed with the peacekeeping organisation Action Force. Later however, according to one account, Ironblood betrayed the Red Shadows to the U.N., leading to their destruction, and went into hiding before reappearing with a new identity as 'Cobra Commander' and forming the new organisation Cobra. The Black Major later led the surviving Red Shadows in an attempt at revenge on their former leader.

Ironblood's becoming Cobra Commander was an attempt at tying two separate continuities together, and is not regarded as canonical in the American G.I. Joe titles which effectively swallowed up Action Force.

Ironblood made most of his appearances in Battle Picture Weekly.

Retrieved from "https://britishcomics.fandom.com/wiki/Baron_Ironblood?oldid=146952"
Community content is available under CC-BY-SA unless otherwise noted.