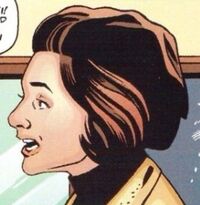 Barbara Wright was a history teacher at Coal Hill School in Shoreditch in the early 1960s. Kidnapped by the time traveller known as the Doctor, along with her colleague Ian Chesterton, big-haired Babs spent the next few years reluctantly lurching from one crisis to another on a succession of alien planets and at various times in Earth's history until she and Ian finally managed to get home in a stolen Dalek time ship. They then apparently married and ended up at Cambridge University. Years later, the Doctor turned up again (with a new face) and the Chestertons assisted him in dealing with the threat posed by their old foes the Tribe of Gum.

The earliest Doctor Who comic stories did not feature the Doctor's television companions, so Barbara has made comparatively few appearances in comics, and all long after she departed the TV show.

Barbara was played on TV by Jacqueline Hill.

Retrieved from "https://britishcomics.fandom.com/wiki/Barbara_Wright?oldid=147083"
Community content is available under CC-BY-SA unless otherwise noted.