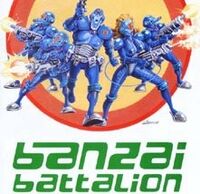 Banzai Battalion are Captain Bug Stomper's élite special forces unit, the toughest, most disciplined squad of professional soldiers you could ever hope to have the privilege of fighting alongside. They never give up, they never back down, they can always be relied on to get the job done by whatever means necessary, and honour is their watchword.

Unfortunately, they're also only an inch or so tall, being basically pest control robots whose primary responsibility is dealing with unwanted insects. But they have never let their shortcomings get in the way of their dedication to duty. Mrs Fitzenheimer's garden will never be unprotected so long as the Banzais are on patrol!

In their first story Banzai Battalion were shown protecting the garden at 3229B Hamilton Heights. When the garden's owners, aged 130 and 128, were held hostage by three vicious criminals, the Battalion intervened after deciding that the intruders qualified as pests because they had trampled on the vegetable patch. Some of them attacked the criminals, while others left the garden to summon Judge Dredd for help. By the time Dredd arrived, the gang had all been severely injured. Strictly speaking he should have impounded the Battalion for making "a vicious assault on humans," but he decided that in this case their actions had been justified.

After their owners died, Banzai Battalion came to Dredd's attention again when they helped to rescue two children who had been kidnapped and held for ransom in 3229B Hamilton Heights, now derelict and abandoned. (Captain Bug Stomper didn't want to interfere with human matters, but Flambo persuaded Charlie to disobey his orders and save the juves.) Justice Department, impressed by the Battalion's usefulness and courage, took them to a secret laboratory and transformed them into a covert ops unit. However, the project was then terminated because someone in authority decided that robots couldn't be trusted with weapons after Judge McGruder's attempt to patrol the streets with robot Judges had gone disastrously wrong.

Banzai Battalion learnt that they were scheduled to be demolished, and escaped. After a long, gruelling trek across Mega-City One in search of a new garden, they found the biggest one in the city, 'the Fitz', a verdant paradise belonging to Mrs Fitzheimer (which had featured in two earlier 2000 AD stories). However, Mrs Fitzheimer was being exploited by an evil nurse, Boylene Mertz, and her husband. Their bratty son, left to run riot in the garden, used his Panzer division robots to almost completely destroy Banzai Battalion, who had to recruit new members from a nearby toy shop.

Mrs Fitzheimer's tormentors tried to kill her friend Rosie, who was concerned about the elderly woman's welfare. Fortunately, Captain Bug Stomper had revised his former 'never meddle in the affairs of humans' policy (thanks to being around the more intelligent and compassionate Flambo), and led the Battalion into a pitched battle with the would-be killers. Rosie escaped and called Justice Department, who arrested the Mertzes. In return for their help, Rosie kept Banzai Battalion's continued existence a secret from the Judges. She moved in with Mrs Fitzheimer to care for her, and the two women allowed the robots to live in the gloriously bug-filled garden. Banzai Battalion later repaid Mrs Fitzheimer's kindness by foiling a plot by her crooked lawyer to have her house and garden sold to a developer.

Unfortunately, Mrs Fitzheimer had never believed that robots could have personalities or free will, which led her to cavalierly retire Banzai Battalion after she was given a set of Pest Patrol robots as a present by the Garden Society. Being unable to kill bugs had a deleterious effect on Captain Bug Stomper's mental health. He became convinced that he was human, because he was disobeying his programming, and led his troops into an all-out war on Pest Patrol, Mrs Fitzheimer and Rosie. By the time Banzai Battalion realised that their leader had become insane and banded together to stop him, Pest Patrol had been destroyed and several small fires had been started in Mrs Fitzheimer's house. Banzai Battalion were allowed to resume their tour of duty in the garden, but Captain Bug Stomper was confined to Mrs Fitzheimer's birdcage, there to spend his days talking to himself and occasionally cackling hysterically.

The strength of a group of very small but very powerful robots carrying insecticidal weapons.

Need recharging when their batteries run down.

Banzai Battalion first appeared in the Judge Dredd stories Banzai Battalion in 2000 AD progs 1135 to 1137 (1999, drawn by Henry Flint) and No Man's Land in progs 1183 to 1185 (2000, drawn by Cam Kennedy) before graduating to their own series for The Fitz (drawn by Ian Gibson) in progs 1257 to 1262 (2001), Save the Fitz (with Gibson again) in prog 2003 (the 2002 Christmas edition) and Robot Wars (drawn by Steve Roberts) in progs 1501 to 1506 (2006). The first four stories were collected into trade paperback by Rebellion in 2005. The series is an obvious parody of traditional British war comics, with the Banzais being basically unable to kill anything larger than a wasp, but never doubting their ability to defeat any enemy, and always somehow winning through in the end.

Retrieved from "https://britishcomics.fandom.com/wiki/Banzai_Battalion?oldid=84516"
Community content is available under CC-BY-SA unless otherwise noted.