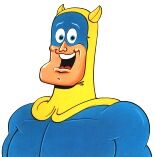 In 1980, D.C. Thomson launched a new comic, Nutty (issue 1 cover dated 16 February 1980). On the back cover was Bananaman, a superhero parody strip drawn by John Geering and written by Steve Bright. Little Eric Wimp lives on Acacia Avenue, and when he gets a call from Chief O'Reilly — a character clearly defined as a parody of Clancy O'Hara, the Gotham City Chief of Police from the televised 1966 US Batman TV shows — Eric swiftly transforms into the clumsy, bumbling superhero by eating a banana.

Assisted by Crow, who is simply a crow who can talk, he fights supervillains including Doctor Gloom (a reference to Doctor Doom (Victor Von Doom), an enemy of the Fantastic Four), General Blight (a parody of Hitler), Weatherman, Appleman, Skunk-Woman (a homage to Catwoman), and Auntie. His powers include flight and super strength, among others. Most of his abilities parody those of Superman.

For the first few months, Nutty's front cover was used to promote the contents or gifts, but before long, Bananaman had proven so popular he became a fixture on the cover, where he would remain for the rest of the comic's existence.

While some people complained when Dennis the Menace and Gnasher got an image overhaul in 2009 when their second animated cartoon series started, they weren't the first D.C. Thomson strip this happened to. In 1983, Bananaman got his own cartoon on children's BBC, which ran until 1986. Voices of the animated characters were supplied by ex-Goodies members Graeme Garden, Bill Oddie and Tim Brooke-Taylor. Eric had until now been a skinhead, and Bananaman had worn red gloves. In the cartoon, Eric had longer hair with two sticking up parts like a banana, and Bananaman had yellow gloves. These changes were reflected in Nutty as well. Also, to tie into the cartoon, Bananaman now also appeared in Beeb comic. Bananaman had his own annual to tie in to the cartoon as well, dated 1984-1987 (published 1983-1986).

In 1985, Nutty comic was merged into the Dandy, and thus Bananaman joined the then 48-year-old comic. In 1999, John Geering died, and Steve Bright took on the artwork duties. He drew the strip until 2006, when he was briefly replaced by Captain Handsome. For a few months in 2007, reprints of Bananaman from 1998 were used which adapted episodes of the Eighties cartoon, to tie in with a DVD release (it had originally tied in to a CBBC rerun).

When the Dandy relaunched as a fortnightly magazine, Dandy Xtreme, later that year, Bananaman was reduced to a single page, now reprinted from BEEB. When those were exhausted, Chris McGhie took over as the artist, until the Dandy reverted back to being weekly with issue 3508 (dated 30 October 2010), and Wayne Thompson took over.

From issue 3618 (dated 14 January 2012) Bananaman joined the Beano.[1] Those were Geering-era reprints and new stories continued to appear in the Dandy.

Retrieved from "https://britishcomics.fandom.com/wiki/Bananaman?oldid=154901"
Community content is available under CC-BY-SA unless otherwise noted.