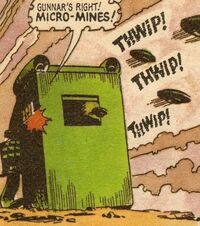 Bagman, a character from the 2000 AD strip Rogue Trooper, was one of the Genetic Infantrymen created by Milli-Com to fight the war on Nu Earth. When he was twelve, his actions led to the murder of the prototype G.I.s when his discovery of the mutated creatures' existence led to Milli-Com terminating them. (This wasn't his fault, because he didn't know that that would happen, he didn't want it to happen, and there was absolutely nothing he could do about it.) Bagman passed through basic training and was cleared for combat on Nu Earth, only to die in the Quartz Zone Massacre. (One account says that he died three weeks after the Quartz Zone Massacre, "in bleak dug-out named Strongpoint Siouxie." Either way, he was killed by the Norts during the war on Nu Earth, and as a result of the actions of the Traitor General.)

The biochip containing Bagman's personality was removed from his corpse by the Rogue Trooper and placed in a slot in his backpack, waiting for the day when he could be 're-gened' (given a new body) after Rogue's squad tracked down the Traitor General who had caused the Quartz Zone Massacre. On one occasion Bagman was hit by a laser-bolt, scrambling his biochip matrix and causing him to suffer periodic bouts of mental instability.

When the traitor had been killed Bagman was re-gened, but his new body soon disintegrated. This was caused by a breakdown of enzyme E, a protective protein vital in the re-gening process, which in turn was caused by a virus Bagman had picked up in the Neverglades. Once again in biochip form, Bagman was taken by Rogue, with Helm and Gunnar, to the planet Horst to look for the Neva antigen, a cure for the virus.

Years later, Bagman and his buddies Helm and Gunnar were re-gened as infants, supposedly with no memory of their past lives. Nevertheless, they somehow ended up as adults working with Rogue again. Bagman and Rogue died in an exploding spaceship, holding hands (see quotes and gallery).

If Bagman's biochip in slotted into a computer, an avatar of Bagman can 'walk around' in a 'computer dimension' and alter the computer's software.

Superhuman. Just three of the gas grenades he carries can permanently transform a town into a polluted hell-hole, and kill all of its animals.

Carried around on Rogue's back.

Bagman's biochip was numbered '3'. His associates Helm, Gunnar and Rogue had biochips numbered 1, 2 and 4 respectively.

Retrieved from "https://britishcomics.fandom.com/wiki/Bagman?oldid=144999"
Community content is available under CC-BY-SA unless otherwise noted.