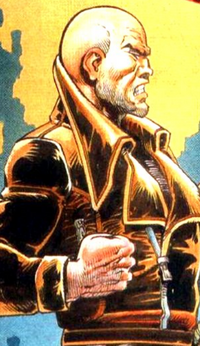 Bad Jack Keller was the leader of the Mean Team, a team of champions of the lethal sport of Death Bowl. Abducted into slavery at the age of seven (or so he believed), he spent fifteen years playing the game and racked up an impressive 5, 000 kill points. However, when he asked the team's owner to set him free, as per an earler agreement they'd made, and the owner refused, Jack killed him, and he and the Mean Team went on the run. Jack later discovered that his past was largely ficticious, and he was in fact an artificial lifeform created (along with the woman named Emerald Eyes) to help bring peace to the galaxy. Sadly, he and his team were ambushed and slaughtered by the Galactic Security Patrol (Jack himself was decapitated) before this could happen.

Jack was supposedly created to be indestructible.

Jack turned out not to be indestructible.

Whatever he could lay his hands on.

Retrieved from "https://britishcomics.fandom.com/wiki/Bad_Jack_Keller?oldid=147578"
Community content is available under CC-BY-SA unless otherwise noted.