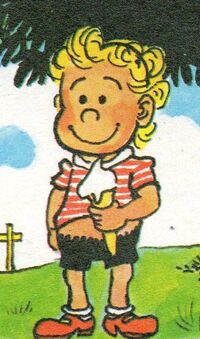 Baby Grumpling (real first name unknown) is a toddler with a fearsome intellect which nonetheless has a tendency to let him down when trying to grasp some of the simpler concepts in life. He believes that school (which he is not old enough to attend) is a prison in which his sister Maisie and her friends are incarcerated every day. He also believes that worms are part of a healthy, nutritious diet (in fact, this may well be true, but only if you really haven't got anything else) and that if he digs deep enough, he'll reach Australia. He digs a lot of holes, when he isn't embarking on some improbable business venture or other (usually worm-related; he invented the wormburger, for instance, though nobody but Wellington ever bought one, and Wellington didn't initially believe it had real worms in it).

Picking holes in the nursery rhymes and fairy stories Maisie reads to him.

Baby Grumpling's mother is never depicted in the strip, but she occasionally speaks off-panel.

Retrieved from "https://britishcomics.fandom.com/wiki/Baby_Grumpling?oldid=116570"
Community content is available under CC-BY-SA unless otherwise noted.