Babe Race 2000 was a series written by Mark Millar and drawn by Anthony Williams which appeared in 2000 AD progs 883 to 888 in 1994. The strip, possibly one of the worst written in the title's history, took its title from the 1975 sci-fi movie Death Race 2000 and revolved around a lethal 24 hour race across the world in which all the competitors were, for some inexplicable reason, improbably proportioned and nearly nude female warriors who basically spent eight weeks brutally murdering each other. What point Millar was trying to make, if indeed there was one at all, is uncertain, but the strip returned briefly in the 1995 2000 AD Yearbook. It didn't get any better, though.

Also by Anthony Williams
Add a photo to this gallery 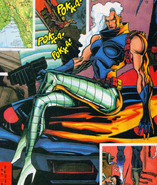 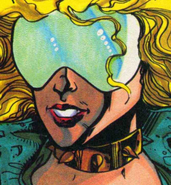 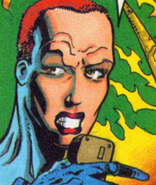 Spud
Add a photo to this gallery
Retrieved from "https://britishcomics.fandom.com/wiki/Babe_Race_2000?oldid=93836"
Community content is available under CC-BY-SA unless otherwise noted.