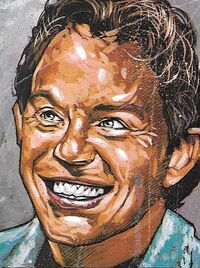 When Labour swept to an amazing victory in 1997, incoming Prime Minister Tony Blair made a fateful decision: he had himself altered by means of the same Compu-Pucture Hyperpower technology which had created M.A.C.H. One into Britain's first Biotronic Prime Minister! Aided by the computer intelligence named Doctor Spin, which was implanted in his brain, B.L.A.I.R. 1 set out to make Britain safe for honest (and dishonest) rich people and politicians, by systematically removing the under-classes who polluted his country.

Eventually, Blair's own long-buried conscience began to rebel against Doctor Spin's control, and the two sides of B.L.A.I.R. 1's mind, one electronic, the other (more or less) human, fought each other. B.L.A.I.R. 1's systems shut down and he died on an operating table after seeing a horrific vision of Britain's future under New Labour — but ultimately, it was God himself who blew Blair's mind. Doctor Spin, however, survived and the government prepared to find him a new host body...

Retrieved from "https://britishcomics.fandom.com/wiki/B.L.A.I.R_1?oldid=149970"
Community content is available under CC-BY-SA unless otherwise noted.