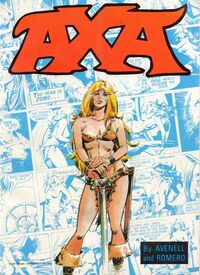 Axa was born in 2080, supposedly 100 years after a nuclear holocaust known as The Great Contamination, in the City of Domes, where emotional attachments were forbidden. A wild spirit, she fled the city (and her lover, Jon) for a new life as a traveler and adventurer in the devastated world outside, exploring the ruins left behind by the 'Old People' and the often bizarre cliques of survivors which had sprung up. The first such group she encountered were the Middle Men, after one of their number-Matt-saved her from a giant mutant spider. Axa had left the society of the Dome because there, love was forbidden and sex purely for recreation; the puritanical society of the Middlemen though, had banned any form of pleasure at all, and she was forced to flee again in order to avoid being forced to become a 'Breeder'. Escaping both the Middlemen and their foes, the Mutants (whose plans for her weren't much different), Axa returned briefly and unwillingly to the City, but was informed that her adventures thus far had been a test set by the mysterious Director, to see if she was capable of carrying out a vital mission in the world outside. Axa had passed, and was armed with a sword and sent out to meet her destiny.

Axa traveled across the sea, and encountered Hector Arkady, a millionaire who had created a fortress on his private island, safe from the world outside but now decaying. Arkady wanted Axa to be a mate for his grandson Jason, the last of the Arkady's, but Axa convinced Jason to leave with her, and the crazed Hector blew up his mansion and himself. Axa and Jason subsequently ended up in Sea Dome, an undersea city ruled by a society of radical feminists who treated men as slaves; the intrepid pair defeated Lenore, mistress of Sea Dome, and sent the oppressed men to the City of Domes, to inject some new blood into the gene pool. Later, they discovered the Valley of Mists, where dinosaurs ruled and the human inhabitants had devolved into cave men...all except for a group of scientists in a hidden city who were creating robots to subjugate the valley and bring evolution back under control. Axa was almost lobotomized, but was saved by Mark Ten, a robot programmed to love her. She and an unwilling Jason took Robot Mark with them when they left, having united the scientists and the cave dwellers in a common cause. Axa and Jason, though, finally parted company in the City of Hope (formerly Las Vegas), a gambling town which Jason stayed on to run after Axa defeated its sadistic ruler, Mr Nero. Axa found a new beau in former gladiator Dirk, who traveled on with her and Mark.

An encounter with the crazed, blind nature worshiper Joy Eden and her elemental creations in Seventh Heaven ended with Mark badly damaged, his circuits corroded by acid, lurching off into the fog after trying to kill Axa, while the woman warrior saw a less pleasant side to Dirk when the pair fell in with pirates and Dirk willingly joined them in robbing the coastal settlements of the Fisher People. Axa herself would not, and instead hooked up with Cap, the 'King of the Coast', who appeared to be protecting the Fisher People. Ultimately, he turned out to be employing the pirates, and Axa defeated him before (with Dirk in tow once more) traveling on to the home of the tree dwelling Sky People, where they became embroiled in a war between factions loyal to Galen (who wanted to reclaim the ground) and Zeph (who thought they should learn to fly, the Sky People having already mutated into slightly birdlike forms). Dirk remained there, having fallen in love with a bird woman, and Axa traveled on alone...though with Galen following her at a distance.

In the hidden city of the Artisans, Axa was reunited with a repaired Robot Mark and successfully got rid of the deranged Galen. After a brief romantic entanglement with twin brothers Jorge and Jarge, she moved on again, with Mark by her side. Shortly afterward, she was reunited with Matt (whom she'd believed dead, but who had apparently been revived by the scientists in the City of Domes and had been tracking her ever since her departure). With Matt's aid, Axa and Mark battled giant mutant ants being controlled by a human telepath in a giant garden. Later, the trio would encounter Gypsies, whose leader, D'Jango, made a play for Axa. Matt was understandably unhappy with his girlfriend's continual dalliances (including one with a conspicuously married farmer whose wife had given them hospitality), but Axa seemed unable to comprehend his jealousy, or indeed to have any regard for his feelings at all.

After becoming embroiled in the war between the Automators and the Mechanics in the town of Junkheap (possibly intended to be the remains of Detroit), Axa next encountered another race of mutants, the Morpho, who hid their deformity beneath beautiful masks, and who were at loggerheads with their unmasked brethren, the Grots. She was romanced by their leader, Viktor, but shrank away from him in disgust when he unmasked, and Viktor's people eventually left Earth in the company of a formerly stranded alien.

Axa, Mark and Matt were stranded on a desert island, where Matt's jealousy over Axa's fickleness and Mark's jealousy of Matt came to a head, but the trio ultimately stayed together and subsequently discovered Axa's true origins in Pill City, home of the Dispensers. There, Axa met the drug addled Vita, who twenty years before had, in a fit of jealousy, ordered a young pregnant woman to be exiled from the city along with her lover, a visiting scientist from the City of Domes. The fate of the parents was never revealed (presumably, they died in the wilderness), but the child was eventually taken to the City of Domes and raised there as an experiment, to see what effect the genes of the outsider woman would have on her development. The child, of course, was Axa.

Next, Axa defeated the manipulative, mind controlling Lix in the pleasure city of Galaland, where the city's ruler, Gala, showed his appreciation by creating a robotic girlfriend-Martha-for Robot Mark, and after that, in a rather odd adventure, Axa was separated from her companions and seemingly sent into space by the astronomer Solom, formerly Gala's friend and partner. She befriended the alien nicknamed 'Extra', and fought the disembodied intelligence Erg (supposedly a living Nebula) to recover the Star Key, a heart shaped artifact which could supposedly unite humanity, and the removal of which from Earth centuries before had apparently caused their descent into chaos and war. In the end, Axa discovers her exploits in space were all a machine induced hallucination, but curiously found she still held the Star Key, which Solom entrusted to her for safekeeping in the belief that she would one day find the door it fitted.

Traveling on, Axa and Matt were seemingly betrayed by Mark, who was adopted as a king by the robotic Clods, who intended to conquer humanity under his leadership.

Unfortunately, we never learned how these events were concluded, though in at least one account, Mark is seen still accompanying Axa and Matt on a later adventure. Subsequent adventures, however, have seen Axa traveling alone, defeating robotic beasts on the 'Island of Noah' and facing yet another female dominated society in some caves, amongst others.

Normal human strength of a young woman who gets intensive regular exercise.

Axa's adventures (which are best described as 'Erotic Sci-Fi', Axa seldom managing to get through more than three panels without losing some or all of her clothing) were originally recounted in the pages of British newspaper The Sun between 1978 and 1985. The strip was discontinued mid story, halfway through The Betrayed in which Robot Mark turns on Axa, but she later returned in an Axa Color album published by US publishers Ken Pierce Inc, which was far more explicit than the newspaper strip, showing Axa in full frontal nudity several times. In this album, Axa has a number of adventures which seem reminiscent of compressed versions of those in the daily strip, so it is uncertain if they share the same continuity (certainly, Axa has no supporting cast in the album). Similarly, 'The Island of Noah' and 'The Lethal Hive' (2000 AD Showcase Vol 2 #4 & #5, Fleetway, 1992, apparently reprinted from a Swedish magazine called Magnum) also feature a solo Axa (and, in the latter case, read like a retelling of the story in the Sea Dome from the daily strip) but she is accompanied by Matt and Robot Mark in the somewhat toned down and sanitized two issue Axa series published by US publishers Eclipse Comics in 1987 (still penciled by Romero but written by Chuck Dixon). These later adventures may or may not be a part of Axa's official history. The original series was reprinted by Express Newspapers in Axa Vol 1. She has also been translated into various languages and appeared in numerous foreign publications.