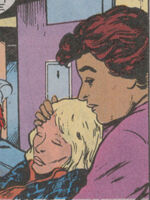 The criminal Vixen took over S.T.R.I.K.E. and hired the assassin Slaymaster to kill all its psychics. Avril was among those who went on the run in London with Betsy Braddock. When Alison Double went into psychic shock due the telepathic link between herself and Kevin Mulhearn when he was shot by the Slaymaster, Avril took care of her as they moved around the city.

Later Avril was murdered by Slaymaster mere moments after he assassinated Vicki Reppion. He plunged a spike into her skull in Forbidden Planet, a comics shop in Denmark Street.

Avril presumably had psychic powers, but they were never demonstrated or specified.

'Avril' is French for 'April', which suggests that Avril or her family may have been French.

Retrieved from "https://britishcomics.fandom.com/wiki/Avril_Davis?oldid=141235"
Community content is available under CC-BY-SA unless otherwise noted.