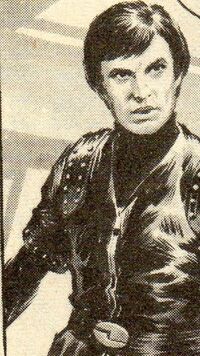 Kerr Avon was a criminal genius who almost robbed the computer banking system of the Terran Federation of millions of credits, but was caught after being betrayed by his accomplice and sentenced to life imprisonment on the planet Cygnus Alpha. Escaping along with fellow prisoners Blake and Jenna, they commandeered the drifting alien starship Liberator and, at Blake's insistence, gathered a crew of freedom fighters known as Blake's 7 to battle the tyranny of the Federation; Avon, however, had no real interest in the cause, his only loyalty being to himself, and stayed around only because he had nowhere else to go and wanted the ship for himself once Blake's crusade was over. Though Avon claimed to despise Blake though, the would-be revolutionary got under his skin enough that when Blake disappeared during a galactic war, Avon reluctantly found himself continuing his mission for reasons of his own, with a mostly new crew. Ultimately, Avon-who had been becoming progressively more paranoid and unstable-tracked Blake down to the planet Gauda Prime, only to end up shooting him dead due to a misunderstanding. The remainder of the seven were then shot down by the Federation, with Avon left surrounded, about to make a suicidal last stand. His final fate is unknown.

Avon originated in the BBC TV series Blake's 7. He was featured in all three of the Blake's 7 Annuals published by World Distributors and in Marvel UK's Blake's 7: A Marvel Monthly.

Avon was the only member of the seven whom the Artificial Intelligence ORAC had any real respect for, almost considering him his intellectual equal.

Retrieved from "https://britishcomics.fandom.com/wiki/Avon?oldid=158407"
Community content is available under CC-BY-SA unless otherwise noted.