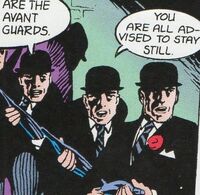 The Avant Guard are characters from the Marvel UK strip Captain Britain. A group of seemingly identical individuals dressed as bowler-hatted businessmen, they served as the personal guard of the Omniversal Majestrix Saturnyne, and were at her side during her unsuccessful attempt to give Earth-238 an evolutionary 'push' that would move it into a new era of peace, freedom and equality. It may be that she had dressed them that way to help them blend in, as Earth-238 was highly conservative, and defended by a band of thugs called the Status Crew.

When Earth-238 descended into chaos, thanks to the reality-warping mutant Mad Jim Jaspers, the Avant Guard tried to "atomise" Jaspers' hero-killing monster, the Fury, but were unsuccessful. Saturnyne, deciding that the situation was beyond her control, ordered the Avant Guard to teleport themselves and her away. This left the Fury free to kill Captain Britain (who got better) and his sidekick Jackdaw (who didn't).

Saturnyne was later stripped of her position and put on trial by the Dimensional Development Court, as she was held responsible for Earth-238's downfall. Her judge, Lord Mandragon, forbade the Avant Guard from testifying in her defence.

Teleportation, presumably through some technological means.

Not strong enough to fight the Fury.

Saturnyne was reinstated as Omniversal Majestrix after threatening to have "my supporters" unleash a clone of Mad Jim Jaspers on Mandragon's world. It is unclear whether or not the supporters to whom she referred were the Avant Guard.

The noise made by the Avant Guard when they teleport is PLINK.

Retrieved from "https://britishcomics.fandom.com/wiki/Avant_Guard?oldid=95477"
Community content is available under CC-BY-SA unless otherwise noted.