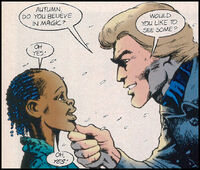 Autumn is a character from the Marvel UK strip Captain Britain. She was a seven-year-old girl Captain Britain met while he was operating on Earth-238. Brian was losing hope of ever returning to his home when Autumn approached him to ask for money for food. While they were talking to one another, he asked her if she believed in magic. Autumn said that she did, so Captain Britain took her flying over the city.

Later, Mad Jim Jaspers used her image to taunt Captain Britain over the demise of his associates Jackdaw, Algernon and Dimples.

Autumn's subsequent fate after these events and before the destruction of her native universe by Mandragon has never been recorded.

Carried through the air by Captain Britain.

Retrieved from "https://britishcomics.fandom.com/wiki/Autumn?oldid=94564"
Community content is available under CC-BY-SA unless otherwise noted.