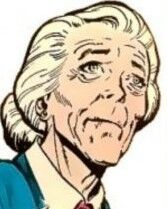 May Parker is the elderly aunt of Spider-Man (Peter Parker), and, not being privy to her nephew's secret, worries about him continually. Not the sharpest tool in the box, she was once engaged to be married to the supervillain Doctor Octopus, whom she failed to recognise despite his having four metal tentacles attached to his body.

Heart condition. May has suffered at least seventeen heart attacks over the years (and died twice). She is also quite staggeringly unobservant.

Most, but not all, of May's appearances in British comics have been reprints of American material.

May seems to have de-aged throughout her appearances in comics!

Retrieved from "https://britishcomics.fandom.com/wiki/Aunt_May?oldid=150780"
Community content is available under CC-BY-SA unless otherwise noted.