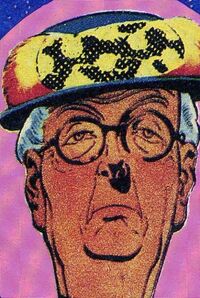 The fearsome but kind hearted Aunt Anastasia was the favourite aunt of Albert Digby, batman to Colonel Dan Dare, and was something of a favourite of the Colonel's, too. In fact, Dare actually named his spaceship, the Anastasia, after her.

Versions of Aunt Anastasia appeared in the Dan Dare series' in both Eagle in the 1950s/60s and its successor title, the Eagle of the 1980s/90s.

Retrieved from "https://britishcomics.fandom.com/wiki/Aunt_Anastasia?oldid=20778"
Community content is available under CC-BY-SA unless otherwise noted.