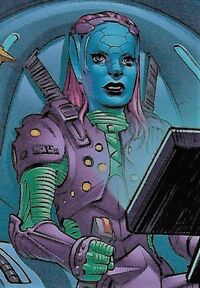 Au Taween is a character from the Titan Comics version of Dan Dare. She is an alien who is apparently the last survivor of the people of Si-Lawn, a planet in another galaxy which was wiped out by the Treens (the planet, that is, not the galaxy). Au Taween responded to this by stealing a spaceship and spending the next five years of her life hunting the Treens, which eventually led her to the Milky Way galaxy and a meeting with Dan Dare and his crew. Dare considered her "magnificent"; she considered him an idiot.

Au Taween's people appear to have been matriarchal, as she automatically assumed that Professor Jocelyn Peabody was the captain of the Anastasia (Dan Dare's ship). Her response when Dare introduced himself as the captain was, "A male captain. Very liberated, I'm sure."

Retrieved from "https://britishcomics.fandom.com/wiki/Au_Taween?oldid=96367"
Community content is available under CC-BY-SA unless otherwise noted.