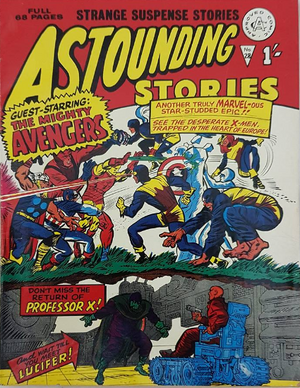 Appearing in "Enter, the Avengers"

Synopsis for "Enter, the Avengers"

Published by Alan Class Publishing. The lead story is a reprint of X-Men #9, published by Marvel Comics in January 1965.

All Alan Class titles were left deliberately undated. however this was almost certainly published before February 1971, given the pre-decimal price. The date given is a best guess, based on the belief that this was a monthly title beginning in February 1966.

Retrieved from "https://britishcomics.fandom.com/wiki/Astounding_Stories_Vol_1_22?oldid=141542"
Community content is available under CC-BY-SA unless otherwise noted.