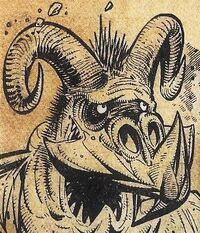 Ashtar is a character from the 2000 AD strip Nemesis the Warlock. He was a washed-up middle-aged Warlock who piggy-backed off his powerful daughter Magna for success. His powers having long gone, he hoped to marry her off to a rich young Warlock so he could get his crumbling castle repaired and once more have a life filled with non-stop parties. It seemed that everybody disliked him, except Great Uncle Baal, whom Ashtar would insult several times. He was an ungrateful sod.

Magna eventually married Nemesis, probably the most famous Warlock in the Nether Worlds, and Ashtar was present at his daughter's wedding. Unfortunately, during the wedding ceremony Ashtar's new son-in-law read Magna's mind, discovered that she had arranged for his previous wife and son to be murdered, and killed her.

Was apparently quite gifted at one stage, all gone now though.

None to speak of.

Not what it used to be.

Magna (rides her back).

'Ashtar' is an alternative spelling of 'Attar', an ancient Middle Eastern god. 'Goat of Mendes' is one of the titles of Baphomet, a.k.a. Satan.

Retrieved from "https://britishcomics.fandom.com/wiki/Ashtar?oldid=70127"
Community content is available under CC-BY-SA unless otherwise noted.