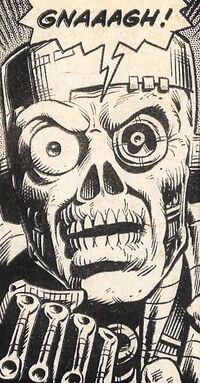 Artie Gruber was a professional Aeroball player until he was accidentally almost killed while competing against John 'Giant' Clay of the Harlem Heroes. Resurrected as a cyborg by the Heroes' then sponsor Ulysses Cord (who was actually out to destroy them), the mentally unbalanced Gruber was now motivated solely by a need to kill Clay, whom he blamed for turning him into a monster. Used as a pawn by several of Clay's enemies, Gruber attacked the Harlem Heroes three times (including once after they renamed themselves the Harlem Hellcats).

At one point Gruber covered himself in 'nu-skin' to masquerade as Joe Mugglie, the captain of a team of Aeroball-playing androids. The nu-skin disintegrated after Zack threw the ball in his face. The androids mobbed Gruber and forced him to crash into the stadium's seating area. Gruber was presumed dead and sent to a crematorium, but his controllers revived him with a remotely activated 'cardiac boost' and he came round just in time to throw the unfortunate crematorium staff into the flames.

Gruber's last clash with the Harlem Heroes ended with him plunging into a river wearing a burning jetpack, ironically the same way his first 'life' had ended.

Gruber later resurfaced to battle the second Harlem Heroes, in sequel series Inferno, but it is uncertain whether this strip exists in the same continuity as the original or should be considered apocryphal. See Harlem Heroes.

Gruber's thought bubbles show that he thinks as slowly as he speaks. However, he doesn't speak slowly when he is masquerading as Joe Mugglie.

Retrieved from "https://britishcomics.fandom.com/wiki/Artie_Gruber?oldid=102823"
Community content is available under CC-BY-SA unless otherwise noted.