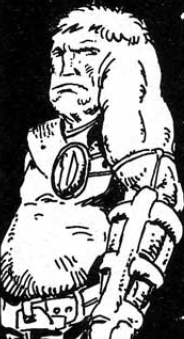 Armstrong Jones is a character from the 2000 AD strip Strontium Dog. He and his partner Big Cynthia joined forces with Slabhead and his pet Dervish Dogs in an attempt to kill Johnny Alpha and claim the bounty on Adolf Hitler.

This failed of course, and eventually the two groups came to a stand off in the far future of the Earth. Armstrong tried to get the drop on Alpha, but he was too slow and Alpha blew his hand off before he could shoot. Meanwhile Slabhead had released the Dervish Dogs to try and kill Alpha as well. Alpha jumped clear of the beasts and Armstrong, thinking they wouldn't hurt him, ran to them, only to be sliced to pieces by the wild monsters.

Jones appears similar to the more popular Evans the Fist, who first appeared a year or so after Armstrong.

Retrieved from "https://britishcomics.fandom.com/wiki/Armstrong_Jones?oldid=139525"
Community content is available under CC-BY-SA unless otherwise noted.