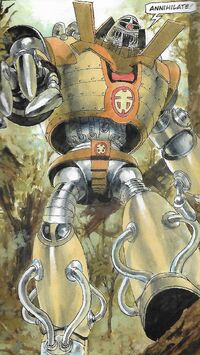 "Armoured Gideon — a mechanical ghost-buster from the Carran — abode of demons. 'The Edge' for short. Created by the Silent Ones — the ones who walk the space between the moments — to keep the temporal plane clear of supernatural interference."

The eponymous star of the 2000 AD strip Armoured Gideon is a big robot who annihilates demons, and "Annihilate" is the only thing he ever says. Gideon was originally one of two such robots, but his partner Armoured Jerubaal (catchphrase: "Obliterate") turned against Gideon and was overcome by the creatures of The Edge before being buried on Earth.

When Jerubaal reawakened and sought revenge, Gideon came to Earth and destroyed him but in doing so came to the attention of psychic photographer Frank Weitz, who pursued him thereafter. At one point, Weitz's involvement with Gideon led him into an encounter with the apparently deranged Bill Savage and Harry Angel, amongst others (including Wolfie Smith, Black-Hawk, Shako, Harry Twenty, Rick Random, Meltdown Man and Agent Rat), who ultimately proved to be ghosts.

Gideon returned in 2018, making a surprise reappearance in The Order, and was possessed by the digitised consciousness of Clara Weitz.

Retrieved from "https://britishcomics.fandom.com/wiki/Armoured_Gideon?oldid=154850"
Community content is available under CC-BY-SA unless otherwise noted.