View source
watch 01:36
We're Getting Mutants in the MCU - The Loop
Do you like this video?
Play Sound
Detective Judge Armitage 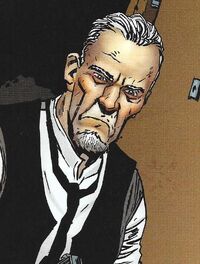 Detective Judge Armitage (whose real name has never been revealed; Armitage was an alias he first used in 2080 AD) is a detective in the Brit-Cit Justice Department and the protagonist of the Judge Dredd Megazine strip Armitage. Cynical, outspoken, and openly critical of the system of privilege which still governs the country, he is deeply unpopular with his superiors, but too good at his job for them to dispense with his services.

As a young man, Armitage spent three months living on the streets before entering a hostel, where he first met his girlfriend Liora. The pair fought for the London Liberation Army in the civil war. When the war ended Armitage embarked on a career as a Detective Judge, despite having twinges of doubt about becoming part of a corrupt establishment system.

After Liora was murdered by a crime boss with a grudge against him, Armitage became increasingly depressed and irritable, feeling that he'd failed her. As a result, he is infamously difficult to work with. His only close friend and ally is his longtime partner, Detective Judge Treasure Steel, though he has also more recently gained a new partner, upper-class Detective Judge Timbo Parkerston-Trant. He took him on when Treasure was temporarily undergoing psychiatric treatment and Timbo was the only Detective Judge available who wasn't already part of a team, because nobody wanted to work with him.

Armitage helped Judge Joyce to rescue Judge Dredd when he was being held captive by dastardly Brit-Cit Judges, even though he doesn't like Dredd very much. This dislike was partly caused by an earlier incident in which a rogue clone of Dredd, modified by alien biotech, was on the loose in Brit-Cit and nearly killed Treasure and Timbo.

Used to have an emergency implant in his arm containing a scalpel blade, a spool of monomolecular wire and a small laser.

The Big Finish Productions audio story Get Karter has Armitage as its protagonist. He is voiced by Trevor Littledale.

Armitage once got away with flicking Dredd the Vs.