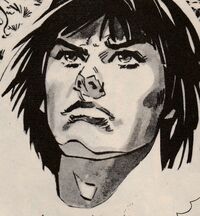 Arlen Lakam was one of the two central characters in the strip Mind Wars, which ran in Starlord #2 to #22. At the beginning of the story he and his twin sister Ardeni were two seventeen-year-olds living on the human colony world of Vulcrugon in the year 3000 AD. They were at university, and apparently Arlen wanted to become a starship drive technician. Then the alien Jugla deliberately gave Arlen and Ardeni psychic abilities, which were triggered by having their parents murdered in front of their eyes. This led to the Jugla trying to use them as weapons to kill all the other humans, and the human-led Stellar Federation trying to murder the twins before this could happen.

The final days of Arlen's brief life were incredibly traumatic. He found himself gifted with a world-shatteringly strong power he couldn't understand and occasionally couldn't control, he saw the death of his parents, and he was treated as a hostile alien by the peaceful planet where he'd lived all his life. He was forced to become a fugitive who left a trail of corpses wherever he went, thanks to the brutal tactics of the Stellar Federation. For example, an untold number of innocent people died when the Stellar Federation destroyed a planet which Arlen and Ardeni had just left, which can't have done the twins' morale much good even though it wasn't strictly their fault. Then they watched their friends Zazda and Kola Rashnik die in quick succession.

Despite receiving assistance from human special agent Yosay Tilman, Arlen was eventually placed under the complete control of the Jugla. Ardeni was forced to murder her beloved twin with her mind powers in order to prevent him from destroying Earth's solar system by detonating the sun with a fusion device.

Retrieved from "https://britishcomics.fandom.com/wiki/Arlen_Lakam?oldid=91873"
Community content is available under CC-BY-SA unless otherwise noted.