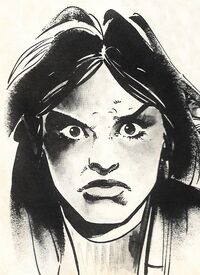 Ardeni Lakam was the principal character in the strip Mind Wars, which ran from Starlord #2 to Starlord #22. At the beginning of the story she and her twin brother Arlen were two seventeen-year-olds living on the human colony world of Vulcrugon in the year 3000 AD. When their parents were killed by an alien Jugla ship before their eyes (which ruined their summer vacation) they developed mental powers. The Jugla wanted to use the twins as living weapons to kill all the humans, and the human-dominated Stellar Federation wanted to murder the twins before this could happen.

After escaping from Vulcrugon, Ardeni and her brother ended up on the leafy planet of Yu-Jubum. It was a nice place. The "native peasants" were a friendly, hospitable bunch, who made a special feast for the twins after they saved them from some deadly fly-spiders, and let them sleep in their huts. Ardeni and Arlen were happy there. Shortly after they left, Yu-Jubum was destroyed before their eyes by the Stellar Federation, who thought that the twins were still on it.

The twins left Yu-Jubum on the ship of their new friend Zazda. They liked him. Then they watched him die when a 'drive modulator' exploded and pierced him with dozens of inch-long needles. Shortly afterwards they watched their other new pal Kola Rashnik, described by Ardeni as a "true friend" (Starlord #12), die of heatstroke in the Gobi desert.

It's safe to say that at this point Ardeni and Arlen were probably the most traumatised teenagers in the entire galaxy. Ardeni's mental anguish increased still further when Arlen was eventually placed under the complete control of the Jugla, and she had to kill him with her mind powers in order to prevent him from destroying Earth's solar system by detonating the sun with a fusion device.

Later, a youth named Tarsh was altered to resemble Arlen in order to trick Ardeni into believing he was still alive. The trick ultimately failed and Ardeni disarmed both sides in the conflict and stranded the leaders of the human Federation on the Jugla homeworld before departing for parts unknown with Tarsh and their associate, special agent Yosay Tilman.

Ardeni and Tilman later returned for a one-off story in the 1981 Starlord Annual. Ardeni was last heard of trying to cure incurables on a planet ravaged by disease.

Undefined but considerable mental powers, including: telepathy; telekinesis; teleportation; resurrecting the dead; melting metal by thinking about it; creating forcefields; fuelling and controlling spaceships with mental energy; opening fissures in the ground; stopping equipment from working; disintegrating solid matter; preventing supernovae; channelling her psychic energy through Yosay Tilman; pyrokinesis; turning people's clothing into sack cloth; creating thermo-nuclear blasts; and the power to 'stop time and warp space' (something also described as "negating the fundamental physical laws of the universe"). Ardeni had little control over her abilities initially, but was later given greater control over them by contact with an alien force, the so-called 'Green Star'.

Retrieved from "https://britishcomics.fandom.com/wiki/Ardeni_Lakam?oldid=91872"
Community content is available under CC-BY-SA unless otherwise noted.