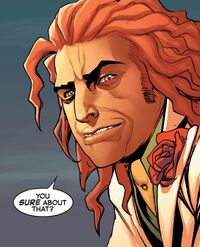 Arcade (real name unknown) is a psychotic assassin with a juvenile sense of humour who kidnaps his prospective victims and turns them out to fight for their lives in his hidden Murderworld complexes, often with the assistance of his associates Miss Locke and Mr Chambers. He attempted to kill Spider-Man and Captain Britain in New York (kidnapping Courtney Ross along the way), and years later hired Slaymaster to try to kill Captain Britain again as a commission for the crimelord known as the Vixen. He has repeatedly clashed with the Captain and with various other superheroes including the X-Men, the Avengers and Excalibur over the years since.

More recently, he has put the Avengers Academy students into Murderworld, where only some survived.

Referring to himself in the third person.

Self-designed traps in his various Murderworld complexes; cufflinks that look like pinball machines.