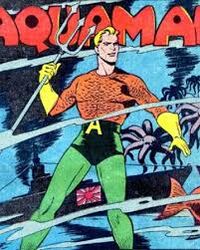 Depending on which version of his origin story you choose to believe, Aquaman was either a) given the ability to breathe underwater by his scientist father, b) the son of a Princess of Atlantis and lighthouse keeper Tom Curry, raised in a lighthouse, or c) the son of a wizard and an Atlantean Princess, raised by either Tom Curry or a school of Dolphins. Other origins may well be available. Anyway, whoever he started out as, Aquaman ended up as the King of Atlantis, and a member of the Justice League of America by virtue of being the world's most prominent undersea crimefighter (though how much crime there actually is under the sea, I don't know).

Able to telepathically communicate with and command sea life (essentially, he talks to fish).

Can breathe underwater or on land

Needs to be immersed in water at regular intervals or he'll die.

Aquaman is an American character, but has appeared intermittently in British reprints for decades, both in solo stories and as part of the Justice League. His appearances include issues of the Superboy Annual, The Super Heroes Monthly, Superadventure Annual, Justice League Annual and DC Spotlight Vol 1 5.

Retrieved from "https://britishcomics.fandom.com/wiki/Aquaman?oldid=159848"
Community content is available under CC-BY-SA unless otherwise noted.