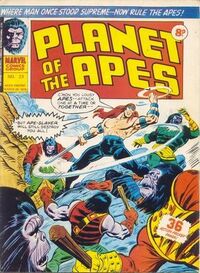 In an alternate future curiously similar to that of Marvel's Martian-hunting future warrior Killraven, bionic simian aliens from Mars invaded an Earth devastated by nuclear war and subjugated humanity using tripod war machines, with brainwashed humans known as the Generals maintaining order for them. A General named Raker, put in charge of training gladiators to fight for the Apes amusement, secretly trained a young boy named Jonathan Dozer to be his weapon against the invaders. Escaping before his training was complete after defeating the Ape named Warlord, Dozer became Apeslayer, leader of a band of Freeman dedicated to overthrowing the invaders. Six years later, Dozer repaid Raker's faith in him by killing him, unaware that Raker had been planning on freeing him all along anyway. The dying Raker revealed Dozer's history to him, and told him he had powers which would help him defeat the Apes, but unfortunately perished before he could tell him what they were. Apeslayer faced Warlord again but ultimately let him go after defeating him in battle. It is unknown whether Apeslayer and his band ever succeeded in overthrowing the Apes.

What weaknesses does Killraven have? Apeslayer probably coincidentally has them, too.

The Apeslayer series was actually an American Marvel Killraven strip partially redrawn and re-lettered as an emergency measure when the British Planet of the Apes weekly ran out of US-originated Planet of the Apes strips to reprint. It ran for just eight issues, issues #23-30. Apeslayer is technically the first ever Marvel UK-originated character.

Retrieved from "https://britishcomics.fandom.com/wiki/Apeslayer?oldid=106135"
Community content is available under CC-BY-SA unless otherwise noted.