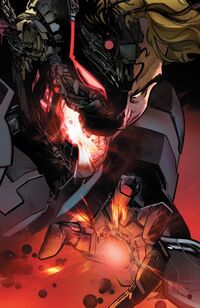 Ant Man is an American scientist who has discovered a means of reducing his size with a special gas and communicating with ants. He brought crooked businessman Charles Harrington to justice after Harrington tried to rob his own company with a stolen teleportation device (see Hulk Comic #48-49). 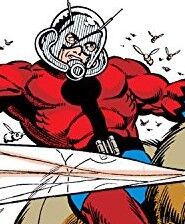 Scott Lang was a burglar with a natural talent for defeating security systems who stole the Ant Man equipment designed and created by Henry Pym in order to use it to save the life of his daughter, Cassie, who had a serious heart condition. He ended up using the costume to thwart a criminal mastermind, in return for which, Pym allowed him to keep it. Lang has since had a lengthy career as a superhero, fighting alongside the Avengers, the Fantastic Four and the Guardians of the Galaxy. At one point, he died (see Avengers Disassembled Vol 1 1) but he later got better.

Able to change size at will.

Retrieved from "https://britishcomics.fandom.com/wiki/Ant_Man?oldid=158739"
Community content is available under CC-BY-SA unless otherwise noted.