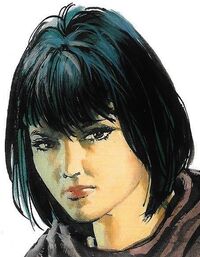 Anna Kohl is the protagonist of the 2000 AD strip The Order. In Germany in the year 1210 she set out to discover the truth about her dead father Siegfried, who had been cold and distant. She found out that he had been part of a cadre of knights called 'The Order' which fought monsters such as the 'wargvolk' (the 'wolf nation', a group of werewolves). Meeting her father's comrades — Ritterstahl, Iron John, Schmidt and Blazen — she was told that she was one of the "black seedline," which might explain why her mother disowned her and said she was "the devil's daughter." Anna and the rest of the Order now had a new menace to face: a world of 'wurms' which "vibrates on a different universal string to ours" and was due to converge with Prague shortly. They defeated the wurms by flooding the catacombs containing their entrance-hole, but only Anna and Ritterstahl (and possibly Aleksy Brazen) survived the conflict.

In 1580 AD Anna was still alive, and still fighting what the Elizabethans called 'wyrms', although her body was now middle-aged. Between the thirteenth and sixteenth centuries she and Ritterstahl had got married. The Order's ranks were swelled by Iztaccihuatl (whose frequent jibes at Anna belied her deep-seated admiration of her), Taras Sich, Daniel Calhoun, Intuitor Browne and Francis Bacon. Their mission in the sixteenth century was a success, and the Wyrmqueen who threatened that era was killed.

In 1641 AD, when the Order was based in France, Anna was talking to her husband about how she thought of the Order almost as their children and worried about them when they were away on a mission. In the middle of the conversation she faded and vanished, erased from history because the wyrms had altered the timeline. Ritterstahl was left bereft, and none of the rest of the Order could remember that Anna had ever existed. (In fact, one of them accused Ritterstahl of being 'senile'.) Fortunately for Ritterstahl, Intuitor Browne managed to reset the timeline (by dint of merging his body with that of the wyrm 'super-string' whose vibrations were altering history), so that Anna Kohl popped back into existence. Unfortunately for Anna, the version of Ritterstahl in this continuity had never met her, and now he didn't know who she was. This meant that it was Anna's turn to be heartbroken.

What Anna and Ritterstahl have, when they have it, must be true love, because it certainly isn't running very smoothly.

Anna, like her late father, ages slower than humans normally do, and is therefore older than she looks. She also appears to have some sort of 'technopathy', being able to 'see' the inner parts of machines and instinctively know how they work.

Anna is described as "a clever, curious girl" by Ritterstahl. She has physical skills to match her intellectual ones, being expert at fighting with a sword or gun, and is also extremely brave.

Retrieved from "https://britishcomics.fandom.com/wiki/Anna_Kohl?oldid=148365"
Community content is available under CC-BY-SA unless otherwise noted.