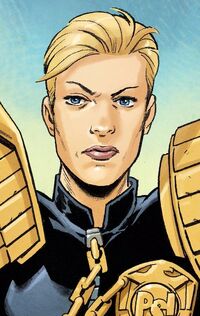 Cassandra Anderson is the eponymous protagonist of the 2000 AD and Judge Dredd Megazine strip Anderson, Psi-Division. She was born with psychic abilities. When she was three years old she lived with her mother and father in Edgar Cayce block. At night time a man regularly came into her room and sexually assaulted her. Cassandra thought of him as 'the monster'. He told her that if she told her mummy then he'd kill her, and that her daddy knew and said it was all right. Cassandra made a doll out of Plasticine (or similar) and stabbed it in the heart to kill the monster, but her father died instead. This made Cassandra sad, because she loved her father.

After this incident, Cassandra was taken into the custody of Justice Department's Psi-Division, who hid the memories of what she'd done deep in her mind, behind a psychic barrier. (This would explain why Anderson used to refer to herself as "Mrs Anderson's little girl," but never mentioned her father.) Anderson became one of Psi-Divisions top operatives, though her rebellious personality and flippant attitude did not always make her popular with her superiors. Psi-Judges are allowed a degree of personal freedom denied to their non-psychic colleagues, but tend to be regarded as eccentric, and Anderson was no exception.

When the alien superfiend Judge Death first came to Mega-City One from Deadworld, Anderson sacrificed herself to become a living prison for his evil psychic essence, being encased in the miracle plastic Boing® in a comatose state. She was later released as a side-effect of Death's comrades the Dark Judges freeing him, and has become one of Death's most implacable foes.

Anderson is also a staunch ally of Judge Dredd (without her assistance he might not have been able to end the Apocalypse War), though he disapproves of her anti-authoritarian attitude. He once described her as having a "defective personality," but he later apologised for this and admitted that she was in fact his friend.

One of the most traumatic events in Anderson's life was the suicide of her best friend, Psi-Judge Corey, who had become convinced that people with beautiful abilities (Corey was an empath) shouldn't use them to do ugly things. (See quotes.) Shortly after this she had a mental breakdown, in the course of which she rediscovered the memories of her childhood abuse and how she had stopped it. She also witnessed the death of PsiKop Amisov shortly after she and he had both realised that they loved each other, saved the world from a supernatural entity that believed that it was Satan, and spent some time with her mind trapped in the body of a gorilla.

Anderson needed a break after all that, so she volunteered for a mission to Mars. While on the red planet, she met the alien race who had created Homo sapiens thousands of years ago and became overwhelmed with guilt at the state of humanity, Mega-City One and her rôle in helping to enforce an oppressive and unjust regime. She resigned from her post and went travelling round the universe in an attempt to 'find herself'. Having found herself on the planet Tartini-9, Anderson returned to Earth and was reinstated as a Psi-Judge by Chief Judge Volt. She has been defending Mega-City One from supernatural and non-supernatural threats ever since, has survived a number of catastrophes, and is still irritating Judge Dredd with her wisecracks.

Anderson has powerful psychic abilities. She is capable of:

Anderson is getting older, and she cannot use the anti-ageing treatments administered to other Judges because they would degrade her psychic abilities.

Lawmaster bike; elk (when on a mission in Sov territory).

Artists who have worked on Anderson, Psi-Division include:

Retrieved from "https://britishcomics.fandom.com/wiki/Anderson,_Psi-Division?oldid=150907"
Community content is available under CC-BY-SA unless otherwise noted.