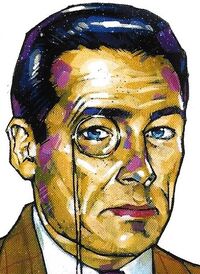 Lord Ampney Crucis, the eponymous protagonist of the 2000 AD series Ampney Crucis Investigates, was an army officer in World War One. An encounter with an eldritch Lovecraftian abomination in No Man's Land drove him temporarily insane (he was nursed back to health by his aunts), and left him with the power to both sense and resist the influence of the abomination's kin during their incursions into our mundane reality. Since then he has made it his unofficial mission to drive all such horrors back to the extra-universal void that spawned them, aided by his loyal butler Eddie Cromwell and his chauffeur Miss Lorelli.

In his first recorded investigation Ampney helped to destroy what looked like a massive sentient plant that wanted to become Empress of the human world and was trying to accomplish its goal by turning people into giant bees (including Lord Ronald Wykes, the husband of Ampney's former fiancée Calliope). His second case concerned the defeat of the War Child, an even more hideous entity that fed on humanity's darkest emotions and resembled a gargantuan embryo built from corpses.

Increased sensitivity to certain paranormal entities and influences; also immunity to such influences, which can extend to people in close physical proximity to him.

Being suave and debonair; having lots of money.

Human male who gets regular exercise (running from or towards other-worldly horrors).

Ampney Crucis Investigates is set in the same universe as The Red Seas, Stickleback, Leviathan and Helium (which may depict an alternative future). Ampney's first recorded adventure involved Lord Ronald Wykes (deceased), who was on the board of the shipping company that built Leviathan. The next one centred around a descendant of Leonard Chipps, one of the police officers who investigated Stickleback.

Retrieved from "https://britishcomics.fandom.com/wiki/Ampney_Crucis_Investigates?oldid=80499"
Community content is available under CC-BY-SA unless otherwise noted.