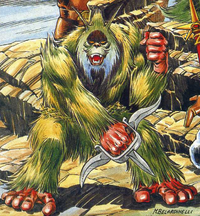 Amok was a "Beester" captured on the Third Orb World and sold into slavery. He ended up participating in the lethal sport Death Bowl as part of Bad Jack Keller's Mean Team, and eventually went rogue and fled Earth with them. He was killed by the Galactic Security Patrol along with most of his teammates.

Retrieved from "https://britishcomics.fandom.com/wiki/Amok?oldid=147537"
Community content is available under CC-BY-SA unless otherwise noted.