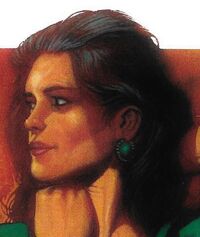 America Jara was the subject of the popular story America, set in the world of Judge Dredd, which appeared in the Judge Dredd Megazine issues 1.01 to 1.07 in 1990. Born in Fred Nietzsche block, she was the daughter of Puerto Rican immigrants who named her America in honour of their new start in "the lan' o' the free an' the brave." Even as a child she distrusted the Judges, and as she grew up she became increasingly dissatisfied with Mega-City One's authoritarian regime. Her first taste of tragedy was when her parents died during 'Block Mania', the prequel to the Apocalypse War, and the turning point of her life came when she went on a peaceful pro-democracy march, with her boyfriend, while she was four months pregnant. The march descended into violence, caused by Justice Department fifth columnists. America's boyfriend was killed, and while she was in custody the authorities forcibly terminated her pregnancy, claiming that the foetus had been a mutant (which no citizen can legally carry to term).

Following a spell in the psych cubes she joined the extremist pro-democracy group Total War, who were not averse to killing Judges to further their aims. America would lure Judges into ambushes for them by masquerading as a prostitute. During one such episode she was reunited with her childhood friend Bennett Beeny, a rich pop star who was slumming it in a quest for some female company. She and her comrades-in-arms killed some Judges, seriously injuring the astounded Beeny in the process, and she later turned up at Beeny's mansion.

Having slept with Beeny, America persuaded him to give her a hundred thousand credits to fund Total War's attempt to blow up the Statue of Liberty, as a symbol of Justice Department repression. Beeny promptly snitched to the Judges, because he didn't want his money to be used for murder and terrorism, and because he wanted America to stop being part of Total War. The Judges had promised that America would not be harmed, but in the event she was shot in the head by a group of Judges led by Judge Dredd (although it wasn't he who fired the fatal round).

In a sense, America's death was just the start of her troubles. Beeny had his brain implanted into her still-viable body after begetting a child on her while she was brain-dead — their daughter, America Beeny. But that's another story...

Human female who gets regular exercise (running away from the Judges).

Either a catastrophic misjudgement of Beeny's character, or a death wish. Both theories are defensible.

The story of America Jara's brief and tragic life (and peculiar post-mortem existence) is part of volume one of Judge Dredd: The Mega Collection, published by Hachette Partworks Ltd.

Retrieved from "https://britishcomics.fandom.com/wiki/America_Jara?oldid=158013"
Community content is available under CC-BY-SA unless otherwise noted.