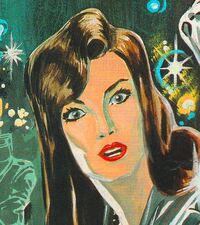 Allana Price, a character from the 2000 AD strip Night Zero, is a creator of 'nostalgia artefacts' such as juke boxes which sell for a small fortune. She hired Tanner to be her bodyguard her when she was chased into his cab by gunmen, but as soon as she got back to her apartment (and her live-in lover Leroy, a New Age Neo-Buddhist) she was shot dead by hitman Johnny Piranha. She later turned up at Tanner's apartment to chastise him for his inability to protect her, explaining that the person who died had been a clone whom the real Allana had used as bait. (The clone had memory implants to make her think she was the real Allana and thereby stop her from running away to Tokyo and rearranging her DNA.)

Tanner and his charge went to the H2O club (a nightclub where it rained indoors) to ask Dolly, his old sergeant, to find out who'd taken the contract out on real-Allana. When they left Tanner announced that his cab didn't smell right and threw a bin at it. It collapsed into a mangled piece of metal the size of a pumpkin, showing that it had been replaced by 'memory metal' that would have squashed the pair to a pulp if they had got in.

Next the pair visited real-Allana's friends Daryl and Miranda van Damm. They borrowed Miranda's van Damm's armourised Mercedes (which she didn't need, being a hologram made from a personality-recording of Daryl's dead wife) and then went into the sewers to see Nemo, who Dolly said had information for them. It turned out that Nemo had accepted the contract on real-Allana, although he didn't know who'd issued it. He killed real-Allana and Tanner escaped via the sewers.

By throttling (non-fatally) real-Allana's lover Leroy, Tanner learnt that she'd had another back-up clone. He arrived where it was stored just in time to stop clone-Allana being gunned down. Clone-Allana could remember what it was like when real-Allana was killed, because "the neural implant in my... in Allana's brain was transmitting to the receiver in my head right up to the end."

After making a trip to the control room on the city's roof, Tanner descended to find Nemo holding a gun to clone-Allana's head. He made Nemo let clone-Allana go by threatening to detonate a bomb he'd left in the control room, thus letting in the rain and ending Nemo's monopoly over the water supply.

Nemo told him who'd taken out the contract on Allana: Miranda van Damm, the hologram of Daryl van Damm's wife. She had found out that Daryl and real-Allana had been having an affair. Tanner had news for the homicidal hologram: Daryl had had the original Miranda killed just after making a recording of her personality, because he resented the fact that she had all the money. Tanner and clone-Allana left the happy couple to it, shared a kiss and walked down the street in sunlight, Tanner having programmed the dome to let the sun shine in for one hour per day.

Retrieved from "https://britishcomics.fandom.com/wiki/Allana_Price?oldid=51511"
Community content is available under CC-BY-SA unless otherwise noted.