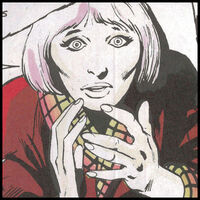 Alison is a telepath and was a member of S.T.R.I.K.E.'s ill-fated Psi-Division, along with her friends Betsy Braddock, Tom Lennox, Kevin Mulhearn, Vicki Reppion and Avril Davis.

When the crimelord Vixen secretly took over S.T.R.I.K.E., she sent her assassin Slaymaster after the Psi-Division in order to silence them. Slaymaster killed Kevin, who was mindlocked with Alison at the time. She screamed his name and collapsed, alerting her friends to the fact that he had been murdered. By the time Captain Britain arrived to stop him Slaymaster had killed Vicki and Avril as well. The Psi-Division's survivors Alison (who was traumatised by all the deaths), Betsy and Tom moved into Braddock Manor for a time.

Later, when the prime minister James Jaspers was putting superhumans in internment camps, the psychics were forced to go into hiding. Alison developed a fever and had to be cared for by her friends. Soon after Jaspers' agents eventually found them, killed Tom and captured Alison and Betsy, putting them in one of the camps for superhumans and mutants. Inside the camp, the two women befriended Victoria Bentley, a magically gifted former ally of Doctor Strange and the Black Knight. After Jaspers' death, Alison and Betsy spent several months recovering from their ordeal in the care of Victoria.

Some time later, when Betsy temporarily took up the mantle of Captain Britain, she was brutally beaten and blinded by Slaymaster. Fortunately, Alison had a Swiss château where her friend could recuperate and adjust to life without her sight. It was from Switzerland that Betsy was abducted by the other-dimensional dictator Mojo.

Alison is physically very weak and is not an excellent candidate for combat. Also Alison wears special glasses. This may be linked to her albinism, but has never been specified.

Alison's role in the adventures of Captain Britain is mainly to move the plot along by providing things such as information or handy Swiss holiday homes.

Retrieved from "https://britishcomics.fandom.com/wiki/Alison_Double?oldid=118128"
Community content is available under CC-BY-SA unless otherwise noted.