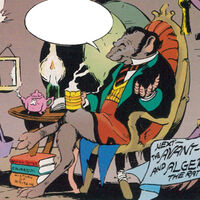 Algernon is a character from Captain Britain. He lived in a sewer tunnel near the base of Saturnyne and her team of Avant Guard when they were introducing an evolutionary enhancing fluid to the city's water supply in order to get this society out of its stagnation. While still a rat, Algernon began drinking this fluid, which quickly evolved him into a humanoid rat.

It was also this liquid that evolved the Junkheap That Walks Like A Man and which prompted Captain Britain and his companion Jackdaw to investigate the source of the mysterious elixir.

Soon Captain Britain and Jackdaw discovered Saturnyne and her men's base and a short battle ensued in which Algernon was devolved back into a common sewer rat.

Algernon's fate after then is unknown as the entire reality of Earth-238 was obliterated later by Mandragon to prevent the spread of the insanity inspired by Mad Jim Jaspers. He probably perished along with the rest of his universe.

Retrieved from "https://britishcomics.fandom.com/wiki/Algernon?oldid=94440"
Community content is available under CC-BY-SA unless otherwise noted.