View source
The Tough of the Track 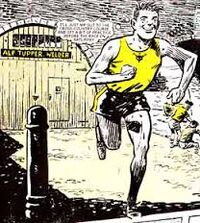 Alf Tupper was a lad from a working-class background who lived in post-war Britain, where he had a variety of jobs including welder, plumber and millwright, all in the industrial town of Greystone. He was also, however, a champion runner, despite his bizarre training regime which seemed to consist of getting as little sleep as possible and living on fish and chips. A perpetual underdog, Alf was looked down on by the Amateur Athletic Association because of his working-class background, but would always be willing to fight for the rights of people in need, even if it meant nearly being late for a race meeting.

Tends to fall asleep on buses a lot.

Alf started his career in The Rover in 1949, but had moved into the Victor by the 1960s. His original career in comics lasted until 1992 when he was last seen in Scottish newspaper The Sunday Post.