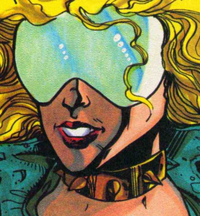 Alex was a biker in the blood sport Babe Race 2000. Alex was a transvestite who had fallen in love with star racer Joy Hogg and posed as a woman to enter the next race. He partnered with Hogg and helped her along the way in the race. Eventually when only a few racers remained, Alex was murdered in the streets when he was shot by Hogg's rival Teaser. When he died Hogg realised Alex's true gender and motives and promised to avenge his death, which she did by decapitating Teaser.

One pistol with silencer.

Retrieved from "https://britishcomics.fandom.com/wiki/Alex?oldid=93840"
Community content is available under CC-BY-SA unless otherwise noted.