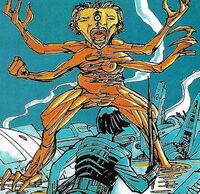 Aleksandr and Aleksandra Romanov are characters from the 2000 AD strip Nikolai Dante. Their father was Dmitri Romanov, who wanted to found a Romanov dynasty to further his goal of supplanting Tsar Vladimir the Conqueror and ruling Russia's twenty-seventh century interstellar empire in his place. To further his aim, he gave each of his children a biomechanical 'Weapons Crest', a highly advanced piece of alien technology which gave them superhuman powers by filling their bodies with nanobots.

Aleksandr and Aleksandra were twins who loved each other very much — in fact, too much. (In this regard they had been set a bad example by their parents, Dmitri and his sister Jocasta.) The only thing they wanted from life was each other's continued existence and adoration. They were, therefore, delighted when their Weapons Crests equipped them with the ability to regenerate from fatal wounds almost instantly, superhuman durability and the power to create 'bio-blades' and 'nano-mines' to kill their enemies with. To make their lives/life even more perfect, their Weapons Crest let the twins become one person, a gigantic golden-skinned, four-armed, three-eyed, hermaphroditic monster. (They weren't a monster because they were a hermaphrodite — they were a monster because they had lethal force, weren't at all hesitant about using it, and thought that they and the house of Romanov were infinitely superior to every other being or off the planet.) This meant that instead of finishing each other's sentences, they had two voices speaking in unison from one mouth. The downside was that they could no longer French kiss each other or stare devotedly into each other's eyes.

When the ship containing their little brother Arkady's Weapons Crest crashed into the Murmansk alienation zone, the twins were sent to investigate. They found that Jena Makarov, the Tsar's daughter, had arrived their first, bringing Nikolai Dante with her. Unfortunately for the twins, Dante turned out to have Romanov DNA himself. (It later emerged that Dmitri was his father too.) This meant that he had bonded with the Weapons Crest meant for Arkady. After trading insults, Jena's squad of soldiers and the Romanov twins attacked each other. Dante tried to ally himself with the twins, but they told him that he was a lowborn bastard who would never be a true Romanov. He responded by using his own bio-blades, given to him by his Weapons Crest, to cut them in half from scalp to groin, and then further mangle the half that was left cowering below him and telling him that they'd changed their mind and he was a Romanov after all. Despite the twins' powers, this proved fatal.

Upon hearing of the twins' death/deaths, the rest of the Romanov family seemed supremely unconcerned. Their father did say that Jena Makarov should be executed as a reprisal, but he appeared to be motivated by family honour and his hatred of the Makarov family rather than by any sort of grief.

The microscopic droids inhabiting their systems, enabling them to create nano-mines and bio-blades.

Retrieved from "https://britishcomics.fandom.com/wiki/Aleksandr_and_Aleksandra_Romanov?oldid=91497"
Community content is available under CC-BY-SA unless otherwise noted.