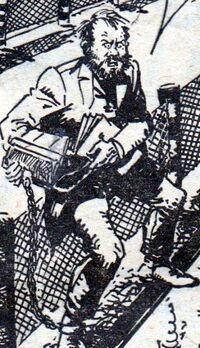 Alec Trench was a failed scriptwriter for 2000 AD who attempted suicide after getting 1,000 rejection slips from editor Tharg. He chained himself to his typewriter and jumped off a bridge, only to be 'saved' by aliens who wanted a human to experiment on. After a month of torture, Trench tricked the aliens into a death trap and teleported himself back to Earth with the greatest story of his career, but unfortunately materialised in the air above Kings Reach Tower, where 2000 AD had their offices. Tharg printed Alec's story, but he didn't live to see it published after falling over 20 floors.

Years later, Alec Trench was eventually resurrected as a zombie.

Eventually, after numerous deaths and resurrections, Alec saw a psychiatrist who revealed to him that he was not, in fact, a real person, but a creation of some maniac writer. Trench refused to believe this and escaped the psychiatrist's office, but was immediately shot dead by a rampaging robot.

Alec Trench was an early pseudonym of Alan Grant.

Trench became something of a minor cult figure after his "death," his name and image repeatedly recurring in Tharg stories for several years with various captions including: