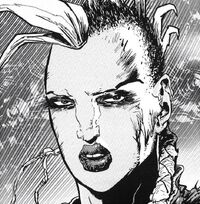 Aimee Nixon is a character in the 2000 AD strips Low Life and Judge Dredd. She was born in the Low Life, the most deprived and run-down area of Mega-City One, in 2097 AD. When she was a child she saw her mother murdered by a strange man who told Aimee that he was her father and had done it so that the two of them could be together. Aimee picked up the gun he had dropped and shot him with it, blowing half of his face off. When the Judges arrived she told them that she had killed the man in self-defence. Her upbringing in the Low Life had given her the natural ability to hoodwink any lie detector, so she was believed.

Aimee later became a cadet Judge, and graduated from the Academy of Law (where she was a "grade-A student") at the age of eighteen. Because she was such a good liar was put in Justice Department's so-called Wally Squad (undercover Judges who pretend to be ordinary citizens or perps), and lived in the Low Life under the nominal supervision of Judge Thora. Tough and uncompromising, Aimee voluntarily had her left arm removed and replaced with a comparatively crude bionic arm as part of her cover.

After she'd spent eleven years in the Wally Squad, Aimee was manipulated by a conspiracy of crooked Judges who murdered two of her friends. Corrupted by experiences like this, she became a crime boss in the Low Life, under the alias of 'the Big Man'. A fight over territory led to her being kidnapped by yakuza, who removed her flesh-and-blood arm. Aimee ended up being arrested by her former comrade and mentor Dirty Frank in Hondo City.

In exchange for what Nixon knew about the Low Life's criminal networks, Justice Department promised her an iso-cube sentence rather than the twenty years in the penal colony on Titan that corrupt Judges normally receive. Nixon duly received a relatively nice iso-cube, with a view, and also had her flesh-and-blood arm replaced by a biological prosthetic. However, after Chaos Day decimated Mega-City One's resources, the Judges reneged on their promise and sent Nixon to Titan, rather than bear the expense of keeping her in custody on Earth. Ex-Judge Nixon underwent yet more body alterations, this time to enable her to breathe the hostile atmosphere of her new home.

Nixon led a revolt against her jailers which was suppressed by Judge Dredd. Fleeing Titan in a stolen ship, she and her fellow prisoners, including Sinfield, ended up stranded on the frozen Saturnian moon of Enceladus (distinguishing features: icy chasms; ice volcanoes; blizzards). They tried to strike a deal with the Sovs in order to stay alive, but when the Sovs detected a strange energy source below Enceladus' surface they landed there, abducted Sinfield and started killing the other convicts.

Justice Department responded by nuking Enceladus, and assumed that Nixon had been killed. In fact, she and the other ex-Judges who were still on the moon at the time had been turned into giant six-limbed ice monsters by the mysterious alien power lurking at Enceladus' heart. What used to be Aimee returned to Mega-City One with the other ex-human ex-Judges and tried to freeze the city to death. She was eventually killed when Judge Sam, a Brit-Cit Judge on Enceladus, destroyed the eldritch mechanism keeping her alive. At this point, death probably came to Aimee as something of a relief.

(Latterly) enhanced durability; regeneration; disappearing into the snow and ice and appearing somewhere else.

Can beat any lie detector.

Some sort of blaster in her bionic hand.

Retrieved from "https://britishcomics.fandom.com/wiki/Aimee_Nixon?oldid=96687"
Community content is available under CC-BY-SA unless otherwise noted.