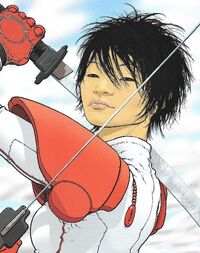 Aiko Inaba was a supporting character in the strip Shimura, set in the world of Judge Dredd, who occasionally appears in her own strip, Hondo-City Justice. She was the first woman ever to become a Judge Inspector in Hondo City (twenty-second century Japan). Fighting not only sexism but also mutants, psi-criminals, organised crime, zombies and techno-nightmares, she has risen to become one of the sprawling conurbation's most respected law enforcement officials and has been assigned a powerful telekinetic and psychic, Junko Asahara, as her cadet.

The man who promoted Aiko to full Judge Inspector status in 2113 AD was the renegade Shimura, with whom she is still in occasional contact. Unlike her former mentor, Aiko has chosen to remain on the right side of the law (most of the time) and work to change the rigidly hierarchical power structure of Hondo City from within. Among her most powerful weapons are her caustic sense of humour and her strong independent streak, although she also packs enough conventional firepower to take on a small army.

Judge Dredd has met Aiko Inaba a couple of times and thinks that she is "a good Judge — better than most he's served with" (Judge Dredd Megazine #224). However, in stark contrast to Dredd, who never removes his helmet, Aiko almost never wears her helmet when she is on duty. The reason for this, perhaps, lies in a musing in her audio diary: "If justice is faceless, trapped behind a visor that masks all humanity, how can it or its judgements ever be trusted?" (Judge Dredd Megazine 2.55.)

Shogun Judge Kobayashi likes Aiko because the dramatic cases she solves make good publicity for the Justice Department. For example, she once went one-on-one with a huge mutant monster the size of a skyscraper, during the 'Project Behemoth' incident, and won by dropping her hover bike and its cargo of mutagen down the beast's tunnel-sized maw. This caused a chain reaction which made the monster explode, leaving Aiko covered in blood and guts but otherwise unharmed.

Some of Aiko Inaba's adventures have been collected in Hondo-City Justice, volume 60 of Judge Dredd: The Mega Collection.

Depending on the kanji used to write it, 'Aiko' can mean 'love child' (not in the Western, born-out-of-wedlock sense), 'indigo child', 'hollyhock child' or 'love fortune'.

Retrieved from "https://britishcomics.fandom.com/wiki/Aiko_Inaba?oldid=72735"
Community content is available under CC-BY-SA unless otherwise noted.