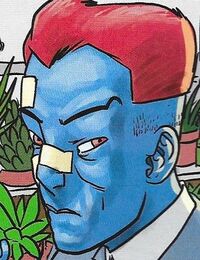 Ahron Shakespeare is a character from the 2000 AD strip Scarlet Traces. He was born in Britain to two of the two million refugees who escaped from the planet Venus when it was invaded by the huge, tentacled aliens known as Martians (called that by humans because they had first invaded Mars and established a base there). Ahron's mother and father, and his mother's three other husbands, tried to integrate into their new home as much as they could. Their child was raised much like any other British boy, with a life of "football, telly, custard creams" and, sadly, bullying from the neighbourhood racists: Venusian immigrants were despised by many for 'taking British jobs'.

When Ahron grew up he became an engineman first class in the RAF's Royal Astronautical Engineers because he wanted to give something back to the country which had taken his family in, and because he had a gift for working with machines. Then he was chosen to go on a top-secret mission to Venus with the 'splice' (Martian-made synthetic humanoid) Iykarus. Their task was to liaise with the Venusian resistance and find out more about a Martian plan to dismantle the solar system's planets and use the material to build a massive sphere around the sun.

At first Ahron was suspicious of Iykarus, blaming splices like him for fuelling racist tensions by making the British afraid of aliens. During the course of their mission on Venus he gradually came to like and trust him. Ironically, being on Venus came as a shock to the Earth-born Ahron, who had to be dissuaded from thinking of the Venusians who had remained under Martian occupation as traitors. An even bigger shock was in store for him when he met Sohna, a telepathic leader of the Theed, a sentient Venusian hive species whom Ahron had thought were the stuff of children's stories. Sohna told Ahron that his mother had been the Advocate Prime of the Cerulean Sisterhood, a clan of anti-Theed bigots. The Sisterhood's short-sighted prejudice had caused them to tell the Martians, when they invaded, how to defeat the Theed. The Martians then turned on the Sisterhood, forcing them to flee the planet and seek refuge on Earth.

Shortly after giving Ahron the information that turned his life inside out, Sohna was captured by the Martians. Ahron and Iykarus escaped to the Venusian wilderness via the Theed's sewers.

The Martians plugged Sohna into their infrastructure so they could use his telepathic abilities. Sohna had left information in Ahron's head telling him where and how to find him, which he and Iykarus did (with the help of a Venusian crime boss called Perelandra). In a telepathic conversation with Ahron, Sohna told him that the 'Martians' had come from a far distant planet an immensely long time ago. They were driven by an urge to always move outwards, evolving into new forms to adapt themselves to each new planet they occupied. None of them could remember that they used to have bipedal bodies that looked similar to those of Venusians or humans, and none of them knew whether they were running away from a disaster or towards a dream of universal conquest. All they knew was to keep moving and keep changing. At this particular point they were at the weakest, most vulnerable stage in their evolutionary cycle, which meant that if Ahron helped Sohna then he could destroy them all.

Ahron had reservations about this, but did it anyway. However, it became apparent that Sohna had miscalculated. His attack on the Martian infrastructure didn't wipe them out, but it did make them angry. They retaliated by using their sun-sphere to channel solar energy and annihilate the Terran fleet which had been bombing Venus in a separate, independent attempt to eradicate the Martians. Ahron and Iykarus escaped from Venus in the ship which had brought them there months ago, attempting to seek help from other inhabited planets in the solar system.

Natural aptitude for anything mechanical.

Ahron's mental image of himself (seen when he communicates telepathically with Sohna) is him in his RAF uniform.

Retrieved from "https://britishcomics.fandom.com/wiki/Ahron_Shakespeare?oldid=91141"
Community content is available under CC-BY-SA unless otherwise noted.