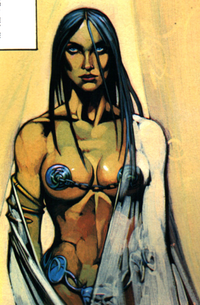 Aeife was a druidess, and the second wife of Sláine MacRoth. Childless herself, she became jealous of his children and transformed them into swans. they were briefly restored to normal by Cathbad, but could not stay in human form. Aeife was punished for her crimes, and Sláine decreed that it would henceforth be a crime to harm a swan.

Retrieved from "https://britishcomics.fandom.com/wiki/Aeife?oldid=123182"
Community content is available under CC-BY-SA unless otherwise noted.