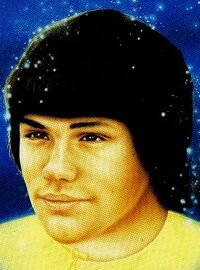 Adric was an annoying adolescent in rubber pyjamas from the planet of Alzarius in the E-Space continuum. Although humanoid in appearance, he was actually a member of an alien species descended from 'marsh spiders'. After the Doctor encountered him on Alzarius, Adric stowed away on board his TARDIS and basically made the Doctor's life Hell from that point on. Self-centred, gullible, arrogant and obsessed with food, Adric eventually sacrificed his life in a doomed attempt to prevent a space freighter hijacked by the Cybermen from crashing into prehistoric Earth. His dismal failure was fortuitous, since if he'd succeeded, the dinosaurs would never have been wiped out, and humanity would probably still be scampering around in the trees picking lice out of their fur. This tells you everything you need to know about Adric, really.

Gold-rimmed badge for mathematical excellence, which proved lethal to Cybermen.

Most of Adric's strip appearances came in two editions of the Doctor Who Annual and a couple of other World Distributors titles, but he also cropped up on occasion in Doctor Who Magazine in the 1990s.

Adric was played on TV by Matthew Waterhouse.

Retrieved from "https://britishcomics.fandom.com/wiki/Adric?oldid=58245"
Community content is available under CC-BY-SA unless otherwise noted.