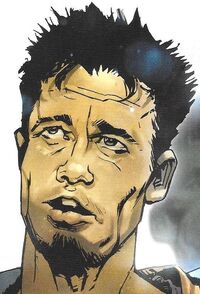 Adam Bulliet is a character from the 2000 AD strip Grey Area. He works as an Exo Transfer Control squad leader in the Global Exo Segregation Zone or Grey Area, originally based in the Arizona desert, where any aliens wishing to visit Earth are quarantined. Bulliet is intelligent, charismatic and self-confident, with a fondness for wisecracks that can occasionally grate on those around him. However, his heart is in the right place, he hates bullies and his heterodox approach to problem-solving and conflict resolution has proven invaluable in a wide range of situations.

One of Bulliet's most impressive achievements was rescuing three alien Swirk from a burning spaceship. While trying to reach a fourth he passed out from smoke inhalation and was clinically dead for eight minutes before being revived. Afterwards he used this incident to develop a reputation for hating aliens, because the Swirk had saved their own species from the ship and ignored Bulliet. However, this proved to be a ruse to allow him to go undercover in a far-right anti-alien hate group and bring it down from the inside.

When Bulliet killed Uuveth, an alien ambassador who murdered humans (including Bulliet's boss Captain Janzen) for fun and then claimed diplomatic immunity, the ambassador's species retaliated by aiming a huge cosmic monstrosity known as a 'God-Star' at Earth. To stop the Earth being destroyed, Bulliet and his team (comprising his lover Birdy, Manners, Kymn, Feo and Neats) had to fly into the wormhole at the God-Star's centre and detonate a nuclear bomb. They expected this to be a suicide mission, so they were surprised when they were sucked into the wormhole after the bomb exploded and spat out by another God-Star on the other side of the galaxy. This God-Star threatened Homeworld, the planet of the Harmonious Free. Bulliet and his team tried to warn the Harmonious Free of the approaching menace, but were instead segregated in the Harmonious Free's own version of the Grey Area.

Being a supremely contented species, the Harmonious Free had no interest in anything beyond their own world. They therefore owned no long-range scanners or spaceships, and did not believe in the God-Star's existence. This changed after Bulliet prevented a depressed Manners from committing suicide. Manners had been threatening to jump off the top of a tall building, so Bulliet punched him off and ensured he landed in an improvised safety net held by the Choodey Bandrall — big, strong aliens also living in the Grey Area, who Bulliet had made into his allies. In return for preventing "human Manners" from "self-terminating," Bulliet was granted an interview with one of the Elite of the Harmonious Free, and persuaded him to extend his telepathic power into deep space. The Elite detected the God-Star and the Harmonious Free finally became aware that they needed to act quickly to defend their planet.

The God-Star's advent was heralded by 'ministars', drone units that landed on Homeworld to break it down and make it easier for the God-Star to consume. The ministars were accompanied by 'angels', the ETC nickname for the opportunistic astral scavengers that followed the God-Star around to feed off its scraps. Two of the Harmonious Free, Resting Bitch Face and Compelling Male Musk Odour, led a squad that attempted to destroy the ministar that had landed closest to the Grey Area. The squad included Bulliet, Feo and Manners, who had previous experience fighting angels. Manners gave his life to kill an angel by setting off a grenade he was holding. Bulliet told the Harmonious Free that they should have listened to his warning earlier, but he was too busy feeling sad about Manners' death (even though he'd disliked him) and the impending destruction of Homeworld to be smug. Now he and the Harmonious Free were allies against a common foe. Bitch (the polite short version of Resting Bitch Face's name) even saved Bulliet himself from being killed by an angel. There's nothing like going into battle alongside someone to make you bond with them — and, of course, Bulliet was an expert in inter-species diplomacy anyway.

Assuming that they would shortly be dead, as the Harmonious Free had no weapons powerful enough to kill a God-Star, Bulliet and Birdy got married during a brief lull in the battle with the angels. (Bulliet proposed in an offhand and flippant yet endearing way that was entirely characteristic of him.) The celebrant was an alien from a species that worshipped a war-god, and the bride and groom wore garlands made from Homeworld's flowers. Fortunately, watching the ceremony and hearing Bitch remark that the pair were creating something that would be perceived as greater than the sum of its parts sparked a revelation in Kymn, who could speak all alien languages. He told the Harmonious Free to sing the God-Star's 'dirge' back to it. This made the God-Star think that Homeworld was another God-Star, and back off.

Shortly afterwards, the God-Star was destroyed by the Congruence, a federation of advanced alien species who were responding to a distress call sent on a transmitter jury-rigged by Birdy and Neats. The Congruence were kind enough to respond in the affirmative to Bulliet's "Any chance of a lift home, mate?" He and Birdy enjoyed a traditionally enthusiastic honeymoon period on the Congruence ship returning them to Earth. Once repatriated, the pair resumed their old jobs in the Grey Area, which had relocated to New Mexico. They were joined in their squad by Resting Bitch Face, who had come to Earth with Compelling Male Musk Odour on a cultural exchange programme.

Retrieved from "https://britishcomics.fandom.com/wiki/Adam_Bulliet?oldid=95295"
Community content is available under CC-BY-SA unless otherwise noted.